The legends say that some Scythian women rubbed one of their breasts with the powder made of green stone that delayed the breast's growth. Perhaps, since those times the legends about one-breasted Amazons arise. The decorations of amazonite are frequently found during excavations of Scythian barrows in the places where, according to Herodot, Amazons lived. The ancient Greek legends assert that waistband of Amazons' leader named Ippolita was made out of green stones. Perhaps these were namely Amazons. In any case, according to the evidence of ancient historians, the stone of Amazons' was mined in Rifeyskie Mountains. This is the place where amazonite really exists. Besides, the legends about one-breasted Amazons could be real. According to modern medical data the powder of Amazonite is able to delay the growth of cells. 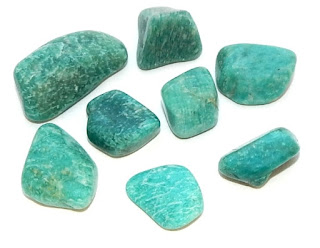 The name of the stone introduced some kind of confusion. The historians assert that in 1783 R.B. Rome de Lil called several green pebbles brought from the basin of Amazon River as Amazon stones. Later, in 1847 A. Breitgaut offered for the Amazon stone more laconic name - amazonite. It is known both as Colorado and as Amazon jade, although amazonite as we understand it today is not found in the basin of Amazon River.

The deposits of the stone exist even in the Cole peninsula, in Middle Asia, Ukraine, Brazil, Egypt, India, Canada, Mongol, Norway, USA and in South Africa.

Green or bluish green field spars with whitish silky tint that are now called amazonites were known since ancient times. Amazonite mines exist on the territory of Ethiopia and Egypt since several thousand years BC. When exploring the Tutankhamen tomb scientist found beads, amulets, earrings and rings made of amazonite in silver mounting. In Russia amazonite was found in 1784 in South Ural. In the end of 18th century stone cutters cut splendid decorative vases from amazonite. Four of these vases made in Yekaterinburg lapidary factory are kept in Hermitage.

Amazonite is a wonderful inexpensive collection and semi-precious stone that is easy to process. Since ancient times in Egypt, Central America and China it was used to make different decorations such as beads, earrings, rings and amulets. Thin transparent plates of amazonite are at times used for creating stained-glass windows and decorative lamps.

Amazonite is considered the stone of courage and devotion. Bright-green color of amazonite creates good mood, relieves the feeling of anxiety and uncertainty. The decorations of amazonite help to strengthen family relations and build strong family.Amazonite Ring

They attract material prosperity and are able to inspire the elderly people to youth impulses. Mystics used the pieces of amazonite for increasing the magical properties of their items and occultism accessories.

The experts insist that the massage with the help of balls of amazonite could relieve nervous fatigue and strengthen heart muscle. In Saudi Arabia people believe that the decorations with amazonite protect their owners from sunstroke and headaches. There is an opinion that amazonite beads can rejuvenate skin and improve its color.

Popular posts from this blog