Agate is a variety of fine-fibre chalcedony that usually has stratified coloring. These strata could have either concentric or linear form. They seem to repeat the contours of underground interstices - geodes, in which the forming of agates frequently occurs.

According to one of the versions the name of agate arises from the ancient name of Ahates River in Sicily, where in ancient times this mineral was mined. According to another version, the word agate arises from the Greek word Ahates that means haрру. In any case, the word agate in application to mineral was known in the times of Theofrast (the 4th century BC). At the same time you should note that in ancient times Arabs and Persians called all stripped stones as jazz.

The color of agate varies from foam white, yellowish and greenish to almost black. If white colored layers alternate with yellow, red, brown, black or other colored layers, then such variety of agate can have its own name. For example, most beautiful agates (so-called eуe or glasses agates) have concentric layers around central point. Such stones were sometimes called owl's eуes. In some agates the 1centimeters wide zone can contain up to 7000 different layers. Such fine structure of the stone can be examined only with the help of microscope.

People with rich imagination are able to detect the entire world in the free designs of agate. In the countries of ancient East people highly appreciated so-called mossу agates with patterns that resemble wild forest bush. Agates with treelike broad pattern and inclusions are called dendritic stones (Greek word dendron means tree). The stones with the design that seem to protrude from fog are called frostу agates. Sometimes broad pattern on the stones surface has acute-angled windings. They resemble remotely the plan of the stronghold on the ancient map. Therefore, such stones are called fortress or bastion agates. Depending on different variants of coloring we can make out cloudy, rainbow and plasmic agates. According to ancient popular beliefs, grey or reddish agates could be found in the nests of swallows. The stones with such coloring are called swallowworts. The coloring of agates is so diverse that as far back as in the 18th century Sweden chemist I. Vallerius asserted that it's impossible to describe all varieties of agate. Namely, one cannot classify agates correctly basing on their coloring. Each stone has his unique coloring. The deposits of agates relate with volcanic rocks and are found almost in all countries of the World. The most beautiful stones are mined on the territory of Uruguay, Brazil, India, Saudi Arabia and Sicily. In Russia since olden times agates are mined in Ural.

Since olden times agates were used for making decorations, beads, rings, earrings, brooches and statuettes. Agates were often used for making entails, the stones with carved design, which were usually used as stamps. Cylindrical stamps from agate existed in ancient Mesopotamia 4000 years BC. Ancient Greek masters cut agate cameos with prominent imprint. At the same time skilled masters used the layer structure of agate to emphasize the details of the design. The face was regularly cut from white layer of the stone, while black and brown layers were used to cut hair and clothes,

Agates differ in size from several centimeters to tens of centimeters. Agates with homogeneous structure are most valuable. The ancient legend says that when Satan was precipitated into Hades he dropped out of his crown an agate that turned into the cup. Joseph Arifeyskiy gathered into this cup the blood of Jesus Christ and therefore he became the founder of Holy Grail order. According to legend, namely this agate cup, which reaches 75 centimeters in diameter is kept in one of the treasure house of Vienna Hofburg .

Agate is one of least expensive semi-precious stones. Even large stones of the most valuable mossy agates in the World cost tens, more seldom hundreds dollars.

Agates were used for making cameos from the immemorial. One of such articles is situated in State treasure house of valuables of Russia. It is the brooch of the third daughter of emperor Pavel I - princess Maria Pavlovna. The brooch is decorated with cameo depicting the head of Athena - Pallada with olive branch on the helmet and the head of medusa Gorgon on the shield.Products from Agate

As you may know, the time of Emperor Alexander I was marked with the passion to everything antique. Cameos that are considered as the symbols of this epoch could be carried with oneself became at that time very popular among the aristocracy of the state. They were considered valuables and were often decorated with brilliant patterns. Namely this kind of brooch was presented in 1804 to Maria Pavlovna on the day of her marriage with crown Weimar prince Carl Fridrich. Being decorated with large brilliants the cameo seemed to make hints about outstanding qualities of its first owner, which the contemporary considered to be one of the best and most outstanding women of the time. Presumably, this brooch was created in Duval brothers' shop between 1800 and 1807. 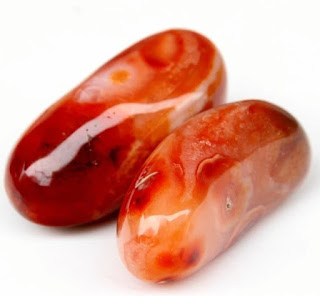 In the ancient Rome agates were the stones of fertility Pomona, which was the patroness of harvest and gardening. It is no coincidence that agate balls were placed in the gardens for protecting plants. Therefore nowadays you can give the decorations of agate to farmers and gardeners. Ancient people believed the agate to arise God-given talent. It gives its owner the courage and longevity. In Europe agate was considered a symbol of health, prosperity and longevity. In India it was considered the symbol of prosperity. People believe that decorations from agate make its owner pleasant in talk and eloquent. It also protects it from the enemies' intrigues. Agate can protect against energetic attacks and energetic vampirism by absorbing negative energy. After coming home the stone must be cleaned by keeping it in cold water. The owner must thank the stone for care and salvage. The ring with agate makes the man attractive for women.

Indian legends say that the decoration out of agate can calm down the baby and helps him to walk earlier. It is no coincidence that agate was considered the talisman of magicians. In Georgia, the newborn were put on their wrist the bead from white agate during the christening. This bead was believed to protect the baby from negative influence of the outer World. They say that white and yellow agates strengthen the good start in man, soften his character and improve his prosperity. According to Indian idea, agate can stimulate the spiritual awakening of the man and tune his up to the fine wave of the World perception. It can open the channels of clairvoyance and extrasensorics.

In ancient times, eye agates were frequently used for mounting into the statues eyes or making talismans and amulets against evil's eye. It is considered that agate can protect its owner against the strike of lightning and rescue during earthquakes. Plinius Secundus wrote that agates will help athletes to reach the sports success and pacify anger.

Alternative medicine specialists assert that agate possesses the receptive energy of Yin. The decorations with agate enhance potency, help during long protracted cough and sore throat. There is a belief that agate removes off - disorders. In Sanskrit Kapha means corporal water, which presents in different organs and fibres. (Intercellular liquid in modern medicine). Kapha gives the energy for heart and lungs and supports the immunity. According to Ayurveda, agate contains the elements of ether, fire and air. Depending on coloring agates can affect on any of chakras. In Middle Ages agate ground with water was used in the form of lotion when being bitten by scorpions and snakes.

Astrologists recommend wearing agate decorations to people born under the sign of Taurus or Gemini. Agates are associated with the forces of Venus, Mercury, Moon and Saturn

Popular posts from this blog